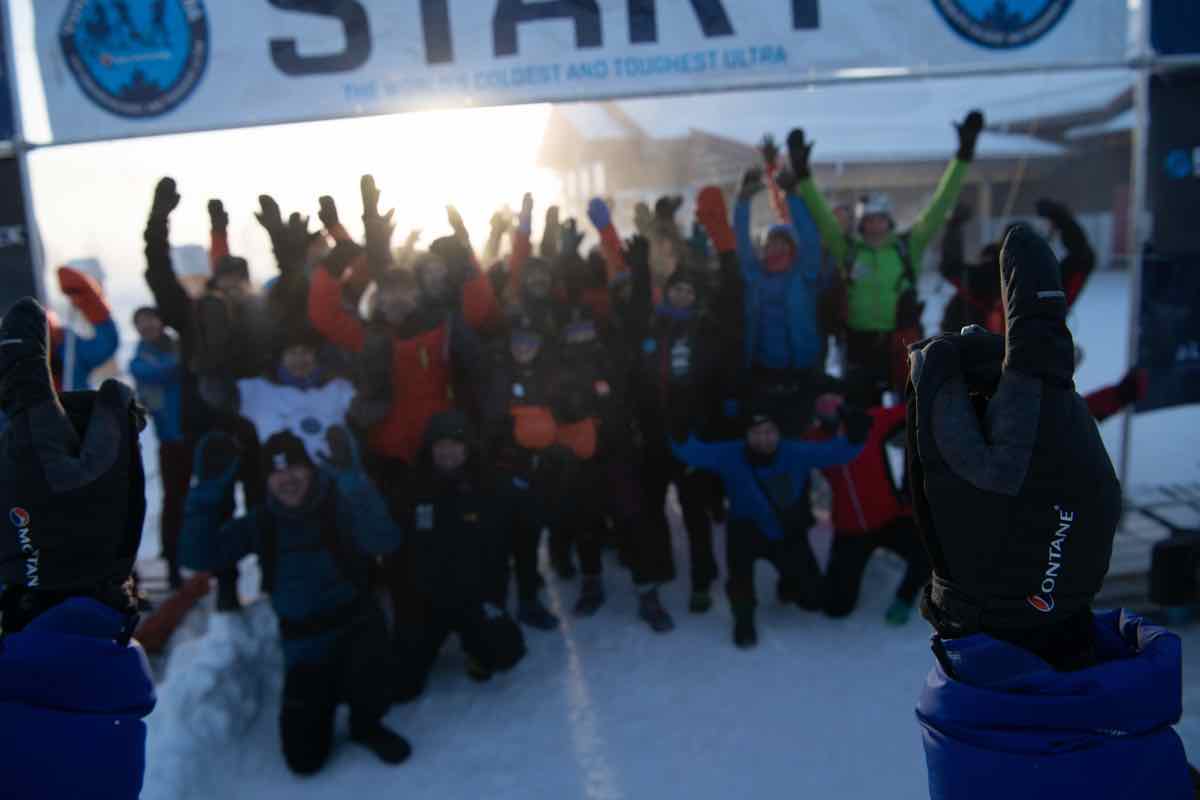 After the race I often get asked if I am happy about how things went. Knowing that everyone is safe, the answer is „yes, I am happy“. However, I also always think about the athletes who were not able to reach their respective finish lines. To all those who had no luck this time I want to say that it was great to have you with us. Whatever the reasons were that you could not continue, I hope you are recovering well and that the MYAU crew can welcome you again in one of the next editions!

Steve Page from St. Albert, Canada, was not even able to get to the start line. His plan was to drive to Whitehorse. After 20 hours of driving a road closure due to an avalanche meant he could not arrive in time. To make things worse he then even got in a bad accident and judging by the pictures of his truck, he is lucky to have walked away from it. Hopefully, he will join us next year!

The weather leading up to the MYAU was all over the place. After a cold spell it warmed up again and just in time for February 3rd it had cooled off considerably. Having extreme temperatures on day 1 almost always results in many athletes not being able to continue after day 2.

But first things first. All but one of the marathon runners were able to finish. As I had already mentioned in a news update, 3 athletes actually went the wrong way towards the end due to a misunderstaning amongst the crew. They all still did finish and were credited the time they lost. Once again, my apologies for the error.

Considering how cold it was, the marathoners did really well! I have seen a lot of super happy finishers at Muktuk Adventures. It was a great pleasure to have you with us! I will soon announce the donation we will give to Little footprints. Big steps – as we give 1 CAD/km run by our marathon runners to this great charity.

Some ultra athletes had to stop at CP1. All others continued on to Dog Grave Lake. On the way to this checkpoint we parked an RV with medical team members Trish and Sarah. It was an „exit point“ for those getting in trouble in an area that is a bit of a cold spot. Two athletes made use of this opportunity to get to safety. Two more stayed near the RV just in case and decided to call it a day the next morning.

The crew at Dog Grave Lake did a great job in this remote area of the trail. It got busy and unfortunately more athletes had to scratch at or near that checkpoint. Here we also had our worst case of frostbite. The athlete affected was Tiberiu Useriu from Romania. Tiberiu is fine but the injury was bad enough to require a helicopter transport and subsequent treatment in hospital. He has been home for some time now and I have not emailed with him again since his departure. It is my understanding that he made the simple mistake of not stopping and dealing with his feet when he should have. Since Tiberiu is a very experienced cold weather runner (he won the 6633 three times in a row), one of the lessons learnt must be that nobody can escape the cold. Not only at the MYAU it’s actually often the experienced athletes who get in trouble. So, I urge all future participants to be very careful no matter how much experience they bring to the start line. I wish Tiberiu the best possible recovery and great success with his project of creating the Via Transilvanica that he works for with so much passion!

We also got reminded just how important the mental aspect is in the MYAU. Russ Reinbolt (USA) talked about it in a very interesting interview he and Pat had with the CBC. I would dare say that all MYAU participants are super well prepared physically. Often it’s the mental challenge that becomes an issue – to stay calm as much as possible and to keep reminding yourself to constantly monitor each and every little thing. Let alone all the difficulties that come up along the way and not only require physical strength but also incredible will power.

Just like the marathon, the 100 mile race always seems to be over in a heartbeat. The winner, David Brabec (Canada) arrived at the finish after 23:42. Montane athlete Pablo Criado Toca (Spain) and Brady Kyle (Canada) placed 2nd and 3rd. Out of 11 who started in Whitehorse 6 were able to make it to Braeburn Lodge.

Compared to the 40 athletes in the 430 mile distance, we had the relatively small number of 6 participants in the 300 mile race. All of them faced an extremely challenging trail between Braeburn and Carmacks. The main problem was lack of snow. Thus the participants had to drag their pulk sleds over roots and all kinds of other obstacles. Most athletes who still were in the race at that time made the Carmacks cut-off which is 4 days and 12 hours. But we did have more people scratching at or before Carmacks.

The next part of the trail was easier. Still for some participants McCabe Creek was the end of their journey. Amongst them Shelley Gellatly (Canada) due to frostbitten fingertips and Micheal Faergegaard (Sweden) because of knee issues.

3 athletes were still in the 300 mile race at this point in time. In the lead Marianne Heading (UK), followed by Gareth Hardcastle (UK) and Ahmad Fathi Junaidi (Brunei Darussalam). And this is also the order in which they crossed the finish line.

At this point, the 430 mile race had been reduced to 14 athletes. Then Enrico Ghidoni (Italy) had to give in to the pain his achilles were causing him in Pelly Farm. The Italian had done the almost impossible in previous years, which was to do the 430 mile race in all three disciplines and each time he won. I am pretty sure that nobody else will ever be able to do that again. So, it’s safe to say that Enrico is a MYAU legend. It was his last ultra of this kind. He said he is now ready to „retire“. However, he will come back in the summer to visit the Yukon again. As he put it when he said good-bye: „Friends forever!“

Not too long after Enrico, Pat Cooke-Rogers (UK) had to scratch on her way to Scroggie Creek. Both in 2017 and 2015 she reached Dawson with her fatbike. This time it just was not meant to be as she had problems keeping her feet warm.

The remaining 12 athletes made it to Dawson. Scott Donatelli (Canada) from Carmacks onwards had to really push himself to continue on. Each time he left a checkpoint he kept telling crew that at the next checkpoint he would stop. I am glad he found the strenght to keep on believing in himself, as in the end it got him a finisher medal.

For Jessie Thomson-Gladish (Canada) it was super tough, too. After having finished the Dawson race twice on foot, she had opted for xc-skis this time. A discipline I do not recommend but I guess in a way that is also then an extra challenge. And she managed to get to Dawson on her „misery sticks“ even though she had doubted it many times.

Gillian Smith (Canada) was also amongst the finishers. It was her second try and even though she had shin splints and a sore wrist she made it and was welcomed by family, friends and crew!

Like Gillian, Scott Thomson (Australia) was there to finish unfinished business and it was great to see him succeed.

Angus Currie (UK) and Alexander Allen (UK) finished as a team. Only one other team had ever managed to do that before them. What was so great about those guys, was their incredibly good mood. No matter what the MYAU threw at them they were always smiling, laughing and enjoying it. At least when we saw them … The same goes for Javed Bhatti (UK) and Joaquin Candel (USA). Always super friendly and going at a steady pace without any major issues.

With Magdalena Paschke (Germany) we had another female athlete giving it a second try. In 2017 she had to stop very early on. This year she was super strong. I don’t know how she actually managed to pull her heavy sled all this way. She is such a lightweight but there was no holding her back and at the finish line she had enough energy to make a dance of joy with the medal in her hand. This makes her and Uwe (her husband who did the 430 in 2017) the only couple where both have a 430 mile finisher medal haning on the wall.

First to arrive in Dawson was Thierry Corbarieu (France) who is one of those few athletes in the world who can go fast on very little sleep and not get in trouble. In the end he was of course tired, too. But just a day after his finish he already walked around as if he had just arrived in the Yukon.

Not too far behind Thierry came Christof Teuscher from the US. Like Thierry he had been able to keep a good pace and with relatively little rest.

Congratulations to you all! And once again thank you to all athletes for coming!

For the detailed results please check out the results table.

Thank you Yann and Thilo for your great films and thank you Joe and Mark for your incredible photos.

I am already getting many emails about 2020. Please give me about 2 weeks. Then I should have everything ready.